by Jody Raynsford | All, Marketing strategy, Tone of Voice

Is it that time of year again?

No, not Christmas. The other one.

The one that’s a bit of a drag whether you’re allowed to be involved or not.

Well that’s the general gist, but we suppose it can actually be a force of good in some ways.

Well, for savvy marketers at least…

One of the easiest pegs on which to hang a marketing campaign is an existing day or event that people are bound to talk about and, as the ‘days of interest’ calendar goes, Valentine’s Day is a biggie.

You officially live under an advertising-resistant rock if over the next week you aren’t confronted with a display of red and pink garishness on at least two occasions.

And sure, it all gets a bit much.

But every year, there’s a handful of businesses that pull off a corker of a Valentine’s Day campaign. It’s all down original ideas and execution that oozes brand personality.

Here are seven such Valentine’s Day marketing campaigns that we are positively lusting after and, as if they were a pack of love hearts, we just HAD to share them with you.

These two money-spinning business giants joined forces for one day only as ‘Ubersky’. Cue excitable customers with enviable disposable incomes paying $500 each so that a plane would leave a 12 character message in the sky for their loved one.

It was an innovative idea that positioned both companies as the cool guys of the everyman’s tech world and no doubt had the wow-factor. 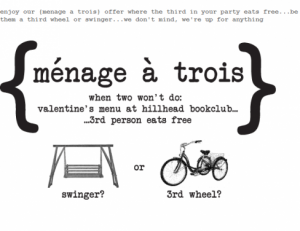 This popular Glaswegian watering hole put on an unusual Valentine’s dining offer (meal for three, anyone?) that raised eyebrows with a highly suggestive twist.

Sure, it’s naughty. We doubt you’ll forget it. Heck, if you’re anything like us, you’ll want to pay them a visit to see whether the humour carries on when you get there. Pretty effective, right?

Bit of an unexpected one, but this retail big boy pepped up its vanilla #loveisallaround hashtag by sharing a Vine in which a soap star bizarrely hides in a supermarket freezer in an effort to avoid her ex.

In doing so, Tesco managed to engage all the people who aren’t in a relationship, or are even experiencing love’s wrath, in their Valentine’s Day antics, something us singletons really quite appreciate!

What makes this one even more impactful is that it reinforces Tesco as part of our everyday, a key side to the supermarket’s brand. Because let’s face it, freezer-hiding aside, we can all relate. 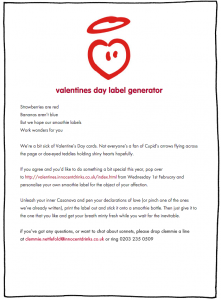 Innocent, a.k.a. the supreme leader of tone of voice mastery, was as entertaining and endearing as ever in their letter that explained how people could personalise an Innocent smoothie bottle for their Valentine, which then led them to a step-by-step label generator: 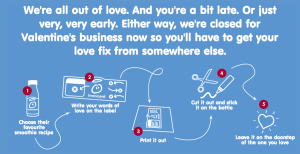 It was a fun way to involve us all and synonymous with Innocent’s creative brand. 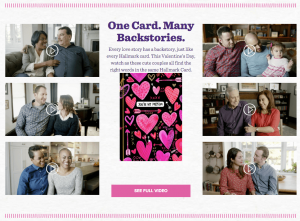 Couples of all shapes and sizes told the Hallmark camera what brought them together in this series of short videos. It’s gooey, it’s sweet, it’s very Valentine’s, but we sort of really like it.

Maybe because a fair bit of effort has gone into making this video content happen or just because it’s a cut above the rest of what’s out there trying to satisfy our inner hopeless romantic at this time of year…whatever the reason, it’s a thumbs up from us.

All together now: ‘Awwww!’. 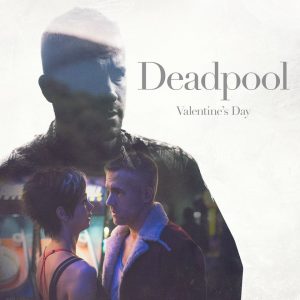 There couldn’t be greater departure from Hallmark’s lovey-doveyness than this. The up and coming Marvel blockbuster, Deadpool. It’s genius marketing team upped the ante once again, this time in the name of Valentine’s Day.

Via the medium of this official poster and trailer, guys who can’t wait to get their big-screen fill of Deadpool were given the means to trick their unsuspecting girlfriends into seeing the movie with them on the weekend of it’s release (Valentine’s weekend), by pretending the gritty superhero movie is just another a girly romance starring Reynolds in his usual, doe-eyed role.

For clarity, here’s a more accurate representation of Deadpool:

Put simply, this was brilliant. A little mean, sure, but brilliant. We could go for aaages about the stellar job that has been done marketing Deadpool – and we will – in next week’s blog! Keep an eye out.

There’s nothing like planning ahead and Ikea knows it, being as helpful (and unique) as ever when they decided to offer a free cot to the parents of babies conceived that Valentine’s Day. Oh, to know how many people responded…

This basic print ad and coupon that appeared in Australian newspapers represented simple reliability and yet, in a most Ikea way, we couldn’t quite believe our eyes.

So, what make these particular campaigns so good?

Well, there were three common elements:

Look, there’s still a week to go before the big day. You still have time to make an impact on your prospects and customers using a little bit of thought and originality.

Use these pointers to shape a Valentine’s campaign that will blow all the right kisses to your prospects.