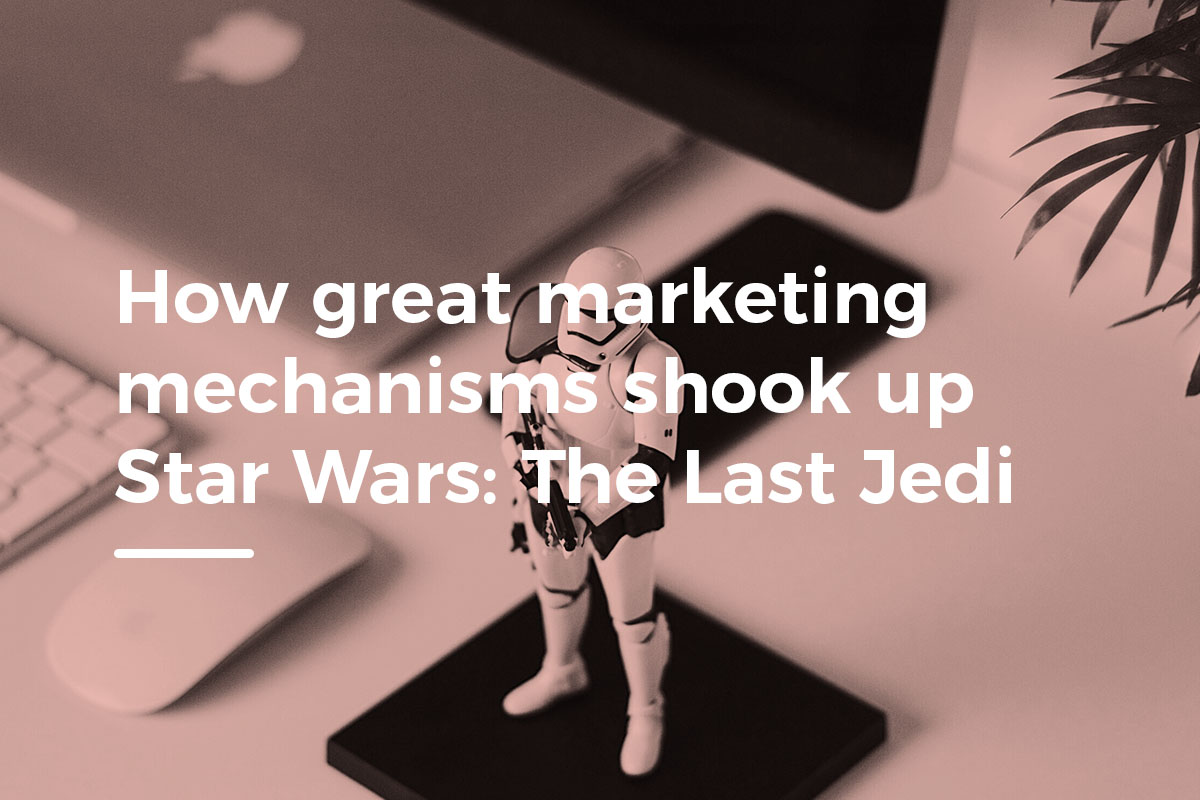 There is a lot of crossover between franchise storytelling and marketing.

Take Star Wars: The Last Jedi, for example. If you’ve been following me online, you know that I’m not exactly overjoyed with The Last Jedi.

Actual footage of me leaving The Last Jedi screening

But for all the issues I personally have with the movie (Dead Leia flying through space? Really? REALLY?), there’s no doubt its change of a direction was a masterstroke.
And it used a little-known marketing technique you can use in your own business to keep your customers coming back.

Sending a beloved classic into a new direction usually splits the fandom in half, so it’s no surprise that the new direction of the highest-grossing franchise in cinematic history started a bit of a war.

Reframing a story like this lets you change the way even the most devoted fan thinks.

It may sound crazy, but this is what writer director Rian Johnson wanted – to change the way throngs of rabid fans experience the story.

After all, that’s what gets people talking, arguing, and—most importantly—seeing the film and re-watching older versions with a new perspective.

It’s the beauty of having a franchise.

You can have existing folklore that transcends different audiences and continues with the history of characters (and storylines) that people love and appreciate.

But to keep the story fresh and audiences coming back, you can’t keep leaning on the same tired stories and putting the same characters in the same situations.

For your understanding to grow and develop around a franchise, you need to put them in new situations to add greater depth to those characters.

That doesn’t just mean landing them in a couple of new locations, or the addition of a sidekick for added cuteness and comic relief.

What that means is fundamentally changing key elements about the story itself, reframing the characters your audience has come to love, and with it, their experiences.

Now, a marketer’s goal should be to keep their product fresh, interesting and front of mind for their audience.

One of the best ways to do that is to change the perception of the product.

And to do that you have to consider more than the product.

Using the Star Wars: The Last Jedi example, it means looking back at what you thought were old and settled ways of thinking about your product, and reframing them until it feels like you’re looking at something different from what was there before.

Maybe, just maybe, the product isn’t as cut-and-dry as the fans originally thought.

Reframing your experience can be done with what Eugene Schwartz called a battle of the mechanisms.

According to Schwartz in his seminal classic, Breakthrough Advertising, when a product gets to a certain stage of awareness among its audience its benefits no longer become effective at attracting attention. This is particularly true in a crowded market place.

Therefore, the marketers needs to turn to what is called the battle of the mechanisms – finding something unique or different about the product the audience didn’t know or didn’t know was important.

Big brands do this all the time.

They take a long established product, focus on different mechanisms for creating the same result as a way of comparing and contrasting, and show that your product is clearly superior.

It’s not about changing the product.

It’s about changing the way your customer sees the product. It’s about reframing your audience’s experience.

In a wider context, think of whiter-than-white washing powder brands or shaving brands and the ever-growing number of blades they boast about.

In our Star Wars example, if you want to move the story of a simple labourer-turned-galactic-hero along, it can be a good move to throw a few spanners into the works.

Once completely enamoured by the thought of saving his friends from certain doom with nothing but his trusty sword and unparalleled command of space-magic, he now sees his contributions as fruitless endeavours, solidifying that doom against which he once so valiantly fought.

Human nature draws us to things that are exciting and new: new stories, new ways of thinking, new ways of doing things. It’s how we managed to adapt over the centuries. So the introduction of a new concept or a new way of looking at a situation is the perfect hook to grab the audience’s interest.

That’s why headlines such as “The truth about…” or “What the [insert industry here] hasn’t told you about… ” and anything to do with discoveries or ways of working remain powerful.

Of course, you don’t have to be hypey in your copy if you understand the mechanism behind it, and can use it correctly.

If you don’t use it correctly, the results can be disastrous.

Take, for example, the concept of the midichlorian count introduced in Star Wars: The Phantom Menace.

It’s totally irrelevant—and a bit jarring—to find there’s a simple blood test to tell you if someone is “One With The Force”. There’s no mention of midichlorians in the original trilogy, so why are they suddenly part of the story? Why is that exposition needed, if it’s not going to be part of the series going forward? There’s a short answer here—it’s not.

The same goes for the introduction of Jar-Jar Binks, who rapidly became one of the most hated characters in the series. His combination of slapstick comedy and deus ex machina survival methods were too much, too unbelievable.

Like a hyped-up headline, they promise you that this thing is going to be different, better, improved, but in reality… it was just a gimmick.

If your differences don’t have a real purpose—if you’re just adding new information for the heck of it (Jar-Jar), or explaining things that don’t need to be explained (midichlorians)—you’re not using the mechanism correctly.

And it’s going to come back to bite you in the end.

Get it right and you can dominate your market, even if you’re not a first mover.

It’s all about disrupting and reframing your audience’s perception of your product.

Understand what your audience values, dive back into your research and mine those nuggets of gold in your business and discover a mechanism you can use to change up your product or service.

May the force be with you…