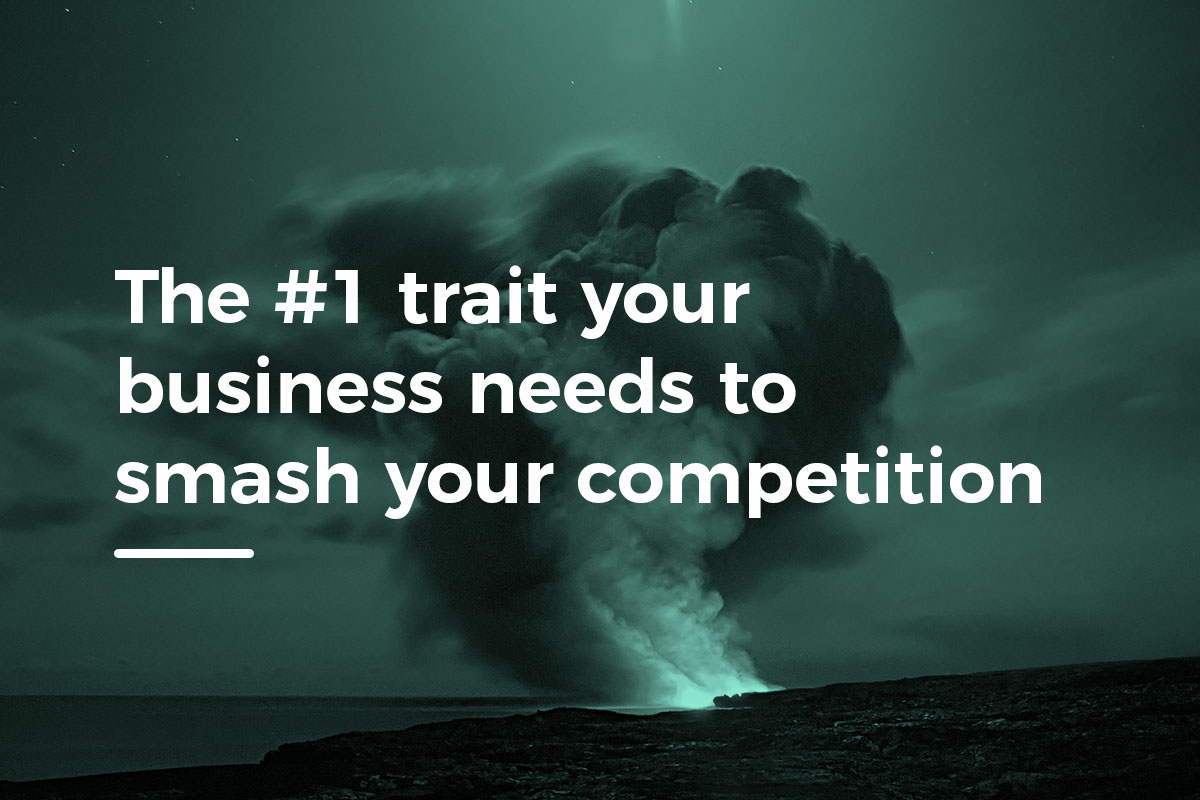 The #1 trait your business needs to smash your competition

When you begin your journey as an entrepreneur, it’s hard to imagine how the greats like Apple and Lovefilm created their immense success despite killer opposition.

Competing against overbearing competitors and successfully changing your industry may seem like an insurmountable task. I’m here to let you into a secret:

It doesn’t have to be.

Your business must be built to withstand a never ending torrent of attacks because — unlike an army you can conquer once and be done with — the threat of competition never ceases.

If your approach is proving successful, they sure as hell won’t stop until they either take you out or match what you’re doing.

Here’s what you need to fight back..

Resilience has been variously described as toughness and the ability to quickly bounce back from difficulties (or as former QPR manager Ian Holloway famously called it, “bouncebackability”)

But it also has another meaning, the ability to spring back into shape.

Think of it like applying earthquake measures to a skyscraper. You need to add shock absorbers so it can flex and bounce back when put under pressure. And that’s exactly what business moving through the stages of disruption needs.

An excellent example of a business that’s showed consistent resilience and as a result dominated their market on an inconceivable scale is Apple.

Before the release of the iPhone in 2007 (after which there was no turning back as far as the company’s global impact goes), things hadn’t exactly been plain sailing.

Apple had to keep its head above water in a tough industry ruled by Microsoft for years.

Many times, the company looked like it was on the brink… yet never stepped off.

So how did they do it? How did they succeed so well they ended up on level playing field with (if not with the upper hand over) their biggest competitors? What are the building blocks behind Apple’s resilience?

More than anything, it’s down to Apple’s relationship with its audience. They knew there was a market for technology that offered a sleeker, more premium experience to users and, boy, did they tap into that…

As far as the product itself is concerned, Apple’s operating systems were designed to be an improvement on the features offered by competitors. Great. Yet crucially, Apple understood that for their products to be received with the level of fervour necessary to build real momentum, they had to master the presentation of these products.

They had to communicate, communicate and communicate some more, the wider benefits of using Apple products beyond just practical concerns. It’s about lifestyle, about status, about staying ahead of the game. And that’s exactly what they did.

By defining the wider value associated with their products upfront and letting it lead the way in how they marketed their products, Apple quickly built a community. An intensely loyal following.

And this was long before the iPhone. There was a time when Mac users were almost known as a committed but eccentric bunch who seemed determined to not fall into the inexorable march of Microsoft. But hold out the company did, and it was this band of fervent Apple devotees who helped the company survive when so many other tech companies would have faltered.

It’s why when they revealed the iPhone — their truly game changing product — they were able to achieve unprecedented levels of success.

To this day the sense of belonging Apple has created for its customers causes people to outright announce how they’ve been ‘converted’ as soon as they buy an iPhone or iPad. There’s no other brand that has quite the same power…you just don’t hear of people ‘converting’ to Samsung, or HTC in the same way, do you?

This sharing of values and garnering of a loyal following is what kept Apple buoyant in hard times. They maintained the same iron-strong value propositions as the day they started out, giving them a baseline of resilience which has made their brand seemingly infallible.

How can you replicate Apple’s resilience in your business?

Apple didn’t just have a lucky break. They stuck to a framework we advise you start following to help build resilience on your journey to disruption.

This framework breaks down into six areas for you to focus on. This is what Apple does:

They know exactly who their customer is, what their deepest desires are and how their product can change the lives of their fans. In actual fact, they know what you want before even you do. They’re that good.

Keeping an updated perfect customer profile will help streamline your focus to give your ideal customer exactly what they want. With media and technological changes constantly altering people’s desires, you too can have your finger on the trigger ready to adapt your offering.

Apple have a clear and succinct way of communicating their difference which anyone can repeat. They have a crystal clear point of differentiation, catering high quality, easy access devices to an ever growing loyal fanbase.

Your ironclad proposition defines how perfect your offering is to your perfect customers. Even when you get put under immense pressure, with clear messaging you’ll be untouchable.

They have a company message bigger than themselves, which their audience can resonate with and really get behind.

Well, they certainly did under Steve Jobs, which helped drive them to the top. They wanted to “make a contribution to the world by making tools for the mind that advance(d) humankind.” This vision reached into the community and people got behind it. And, of course, it helped the products looked stunning.

Attaining a connection with your customers through strong mutual feelings or beliefs creates trust and brand loyalty. These loyal customers will fight for you if give them reason to, heightening your business’ resilience.

They communicate frequently and meaningfully with their audience, constantly offering them value. When you buy an Apple product you can’t help but feel a sense of belonging. Their continual, helpful contact shows that they care, and that makes a huge difference for their customer satisfaction.

As well as providing your customers with reasons to like and trust you, frequent communication with your existing customers will provide powerful insights into how you can upgrade your future offerings. This gives your business adaptability and resilience.

Apple is a high tech company but they still understand the importance of face to face conversation for building rapport. The Apple stores set up in cities globally are physical places where fans can go to get assistance from Apple’s personable staff. And the design of these stores is just as sleek and accessible as their products, furthering their image and boosting their brand visibility onto the streets.

They increased their visibility by marketing strongly within the correct channels, following the warmest leads and meeting with the best affiliates and partners. Apple jumpstarted their success through technology conferences, teasing their products and speaking to enthusiastic customers and influential media sources to further their message beyond their own reach. Building this ‘hype’ is what helped the iPhone launch become massively oversubscribed. 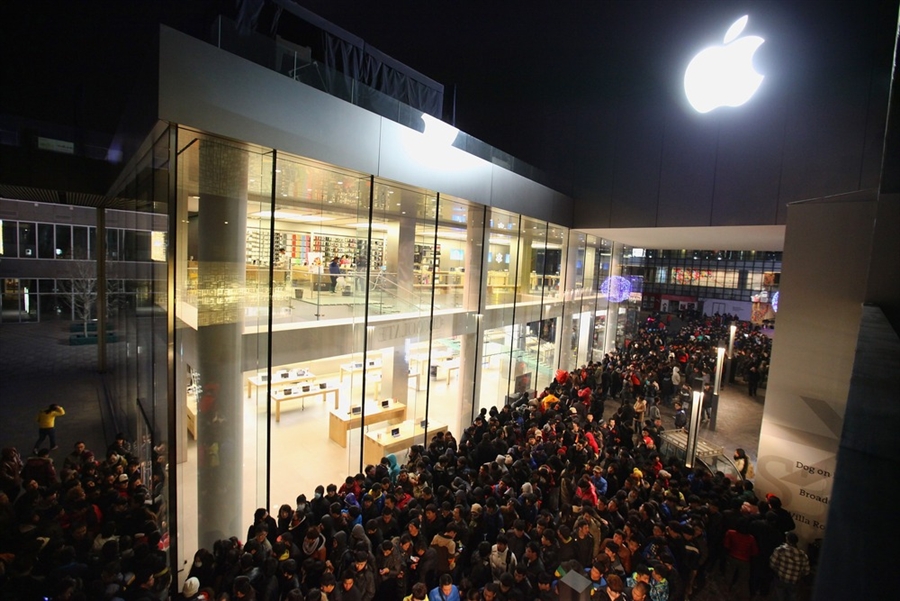 Knowing the right people will fast track your progress to becoming a real authority in your industry. Attending conferences, giving seminars and talks, and constantly building your network of contacts is what will drive your message further into your market.

Lastly, they built a strategy which not only prepared them for breakthrough, but also prepared their business for heavy attacks from any and all competitors. This is how they stayed afloat in a Microsoft dominated market.

Whilst seemingly self-explanatory, so many businesses lack resilience because their strategy is flawed. Know where you’re driving and you’ll stay on the right track. Remain resilient by building a watertight strategy and keeping to it.

All it takes is a bit of flexibility, and a willingness to change either your marketing strategy or your product to better suit the needs of your customers and you’ll be on track for fulfilling your company’s most ambitious goals.

The place to start thinking about these six points in relation to your business is with our Industry Disruption Scorecard. It’s the first thing we run through with our agency clients.

Discover the Six Shifts your business needs to make to disrupt your market, make more sales and have a greater impact in our new online workshop. Click here to register for the next workshop.